The SanDisk Cruzer Blade 8GB USB Flash Drive was purchased from Dick Smith Electronics on special last weekend for $17.88. An 8GB model for <$20 is a pretty good deal for your standard everyday flash drive – there are higher performance models available for only a fraction more, but they are only available from specialist computer retailers and/or online stores, requiring an additional $5 or so p&h. 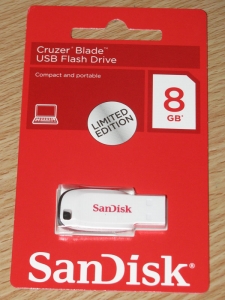 The Cruzer Blade package is fairly minimalistic compared to past SanDisk products (Micro, Contour etc). The reverse side has basic warranty information in multiple languages. This model is apparently limited edition, but there seems to be no difference other than the body colour (other models are black). The flash drive measures in at 40 x 18 x 7.5mm (L x W x H). Keeping the flash drive attached to a lanyard is probably a good idea – unlike previous Cruzer models, the Blade is not supplied with one to keep costs down. The body is made of 2 molded plastic shells. Worryingly, the USB connector is molded into the plastic body and may be prone to damage. While it negates the need for an end cap, the connector is prone to flexing when inserting the flash drive into tighter USB ports. The plastic is reasonably flexible so it should survive everyday use with reasonable care. One other thing problem is the lack of a status LED. While modern OS’s allow hot-plugging USB devices,  more than enough people corrupt all their data by removing a flash drive while it is in the middle of a write operation.

I ran the Cruzer Blade through a suite of benchmarks to assess its performance. Long story short, the Cruzer Blade is a fairly average performer. In fact, the previous generation of SanDisk flash drives (Cruzer Micro) which the Cruzer Blade replaces is actually moderately faster. Also, be aware that performance may vary slightly between different capacity models (eg 8GB vs 16GB). With that said, on to the results (click to enlarge): 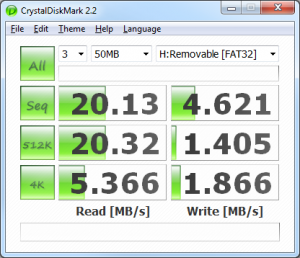 The first utility used to benchmark the Cruzer Blade is CrystalDiskMark 2.2. A total of three tests are run in read and write mode; 3 repetitions are averaged to give the final result. Sequential represents the maximum achievable speed if you were to copy large files to the drive. Random 512k and 4k are more realistic representations of speeds achievable during daily use. The Cruzer Blade manages a reasonable ~20MB in Sequential and 512K read but slows down significantly with smaller file sizes. As expected, the write speeds are significantly slower. 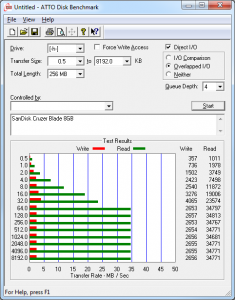 Next, ATTO Disk Benchmark was used to assess read and write speeds at different file sizes. Attainable read speeds vary from 1MB to 34MB/s, and 357KB/s to 4MB/s for write. The read speeds overall are decent, but write speeds for 16K and lower are lackluster. Performance for 64K to 8MB files is abysmal, clocking in at 2.6MB/s. 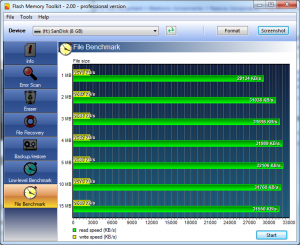 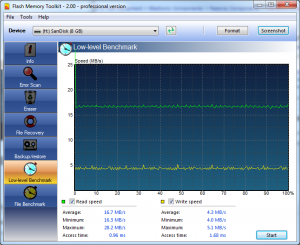 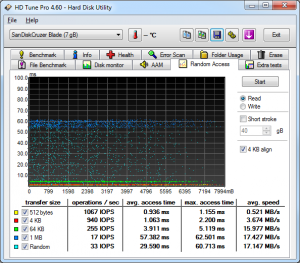 Once again, these results are fairly average. Portable applications will have no problems running from the Cruzer Blade and basic file transfers will complete reasonably quickly.

So how does the Cruzer Blade 8GB stack up? Overall performance is typical of most commonly available standard flash drives. Good read speeds, but write performance is a let down. Computer enthusiasts won’t be satisfied, but for the remaining 95% of the population, the Cruzer Blade will work just fine for everyday use and still kicks the pants off generic, no-name Chinese flash drives.